OK, I know this is completely unworthy and petty, but this picture of Greg Nickels looks like it was taken somewhere in the vicinity of Tammany Hall.
I lost the link to the news story but he's talking to someone who is trying to pick my pocket. Probably. 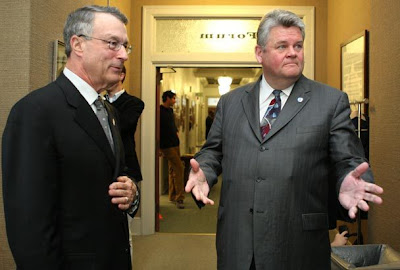 He should find out who cut Chester A. Arthur's suits.

Update, take two, do over. It's not right to mock Nickels because he's overweight, that's just wrong. However this picture is telling a story. And the story goes like this: Sharp money guy with true predator instincts, assesses bumpkin mayor who looks like a used car salesman manager (is that a tally book deforming his coat? Could the tie yell out "The undercoat saves you money in the long term," any louder?). Lean as any cheetah, the fellow on the left, when he steps out -- no strides out -- of frame is as likely to pop a Homburg on his head (I think I see a hat crease in his conservative haircut. Greg, note this guy's hair.) on his way back to Zurich as Greg is to pop a cheeseburger in his mouth. It'll be a Dick's cheeseburger and that makes it a little bit more OK. It's like Max von Sydow and Sean Astin ran into each other at a screening of City of Ember.
Posted by Kyle
Email ThisBlogThis!Share to TwitterShare to FacebookShare to Pinterest