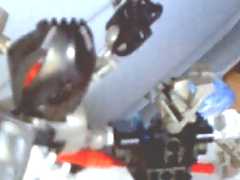 The Toa Maiden once again demonstrates surprising martial elan. The photos do not convey the delicate balance in which the figures are poised. She has already apparently broken the Rahkshi's staff. The Toa Maiden is using her right thigh as a fulcrum as if she were baling hay. I expect that her follow-through to this maneuver will be to throw her feet forward, fall onto her back and use that momentum to propel Vorahk off the precipice.

Since we saw her and her friends arguing with Pattonua, she has picked up protodermis joints.

The damage that she received during a battle with a Bohrok Kal has left her invulnerable to Krana and Kraata. They can't get a grip on her face because of her two missing teeth.
Posted by Kyle
Email ThisBlogThis!Share to TwitterShare to FacebookShare to Pinterest