Here's something basic that I learned today. A Windows computer configured for DHCP, if it cannot contact a DHCP server assigns itself an ip in the 169.254.x.x range. If it is set to share private IPs it can still contact machines on the DHCP-denied network. Hooray. The proximate reason that this became of interest to me is because my DSL machine suddenly can't see the DHCP server for some reason. AAAAAAAARGH!
During my previous Qwest-caused outages, this IP self-assignment did not occur, so there must be some other conditions holding now. Although I'll be phoning up Qwest any minute now just to cover all my ducks. My first guess is that there is something wrong with the DHCP server itself at w-link. We'll see.
Posted by Kyle No comments:
Email ThisBlogThis!Share to TwitterShare to FacebookShare to Pinterest
Took a walk today down the nearby Burke-Gilman trail, a former railroad right-of-way.
Saw a boat from a ways away: 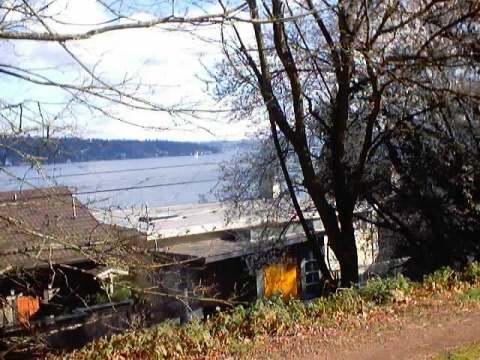 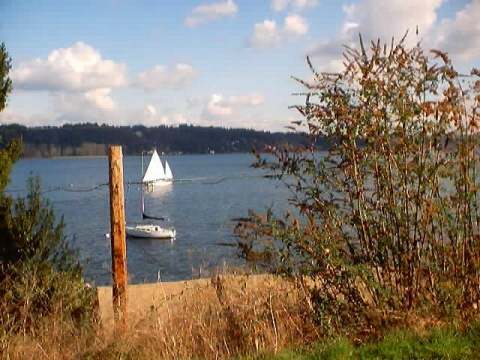 Saw a cat and some ducks: 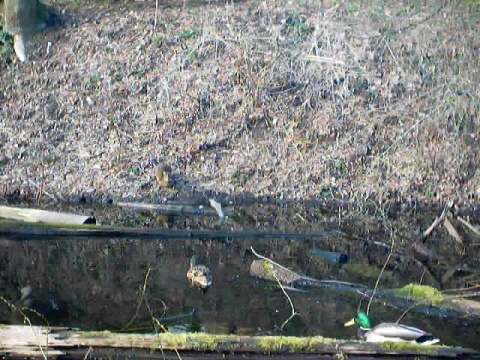 But nothing very interesting happened: 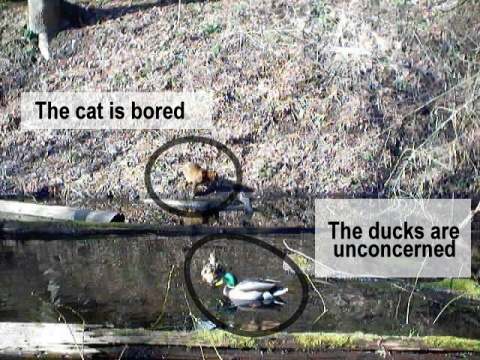 There were actually two pairs of ducks. One pair in the water: 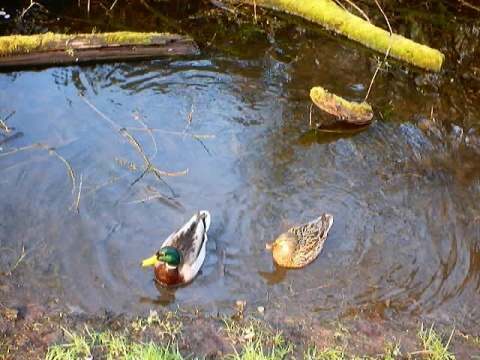 The other pair was wandering around the trail: 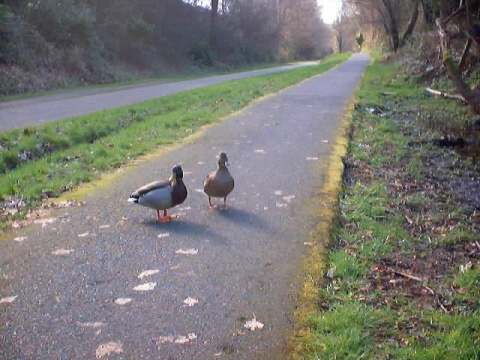 Posted by Kyle No comments:
Email ThisBlogThis!Share to TwitterShare to FacebookShare to Pinterest

Ray asks, "What did you think of Lord of the Rings?"

An amazing feat of condensing. The visuals were pretty much as good as could be expected. Sure, a couple of long shots of hobbits looked like kids in costume, but no biggie. I have a minor issue with the rather cheap-looking effects during Frodo's vision of the Evil Galadriel: strictly Buffy the Vampire Slayer grade. I expect that to be upgraded for the DVD. Did not miss Tom Bombadil, nor his wife the river's daughter. Liv Tyler has found her function in life. Sean Bean fulfilled the character perfectly: he was annoying and then he was a dead hero. Exactly my impression from the book.

I'm not completely happy that it's a bunch of white guys opening their can of whup-ass on uppity colored folks, but there ya go. (Saruman the White indeed) The realization of the wizard's duel was interesting but a tad anticlimactic. Christopher Lee was completely convincing. Completely convincing as in "Let's not go to Chris's party because I am afraid that I may be imprisoned in a high tower by artes magickal."

The characterization of Sam was an actual improvement from the original and was put to good use in the very slight deviation that ocurred at the end. The principals were given the chance to accede to Frodo's wish to go alone instead of Frodo merely running off. He did try to run away from Sam, of course.


> --- Frank Young
>webmaster@htz.com wrote:
>Date: 26 Feb 2002
>06:04:09 -0000 To:
>dzedrick@applemax.com,
>pageguy@appleogue.net,
>jturgiss@appleone.com,
>mancow@applepie.net,
>paresi@applepie.net,
>ndrus@applescruffs.com
>From: webmaster@htz.com
>(Frank Young) Subject:
>Time Travelers PLEASE
>HELP!!!
>
>Folgende Angaben wurden
>im Web-Formular gemacht.
>Die Anfrage erfolgte
>durch: Frank Young
>(webmaster@htz.com) am
>Dienstag, 26. Februar,
>2002 at 07:04:09
>
>------------------------
>
>message: If you are a
>time traveler or alien
>disguised as human and
>or have the technology
>to travel physically
>through time I need your
>help!
>
>My life has been
>severely tampered with
>and cursed!! I have
>suffered tremendously
>and am now dying!
>
>I need to be able to:
>
>Travel back in time.
>
>Rewind my life including
>my age back to 4.
>
>Be able to remember what
>I know now so that I can
>prevent my life from
>being tampered with
>again after I go back.
>
>I am in very great
>danger and need this
>immediately!
>
>I am aware that there
>are many types of time
>travel, and that humans
>do not do well through
>certain types.
>
>I need as close to
>temporal reversion as
>possible, as safely as
>possible. To be able to
>rewind the hands of time
>in such a way that the
>universe of now will
>cease to exist. I know
>that there are some very
>powerful people out
>there with alien or
>government equipment
>capable of doing just
>that.
>
>If you can help me I
>will pay for your
>teleport or trip down
>here, Along with hotel
>stay, food and all
>expenses. I will pay top
>dollar for the
>equipment. Proof must be
>provided.
>
>Please be advised that
>any temporal device that
>you may employ must
>account for X, Y, and Z
>coordinates as well as
>the temporal location. I
>have a time machine now,
>but it has limited
>abilitys and is useless
>without a vortex.
>
>If you can provide
>information on how to
>create vortex generator
>or where I can get some
>of the blue glowing moon
>crystals this would also
>be helpful. I am however
>concerned with the high
>level of radiation these
>crystals give off, if
>you could provide a
>shielding or other
>crystals which give off
>a north polarized vortex
>field just as strong or
>strong enough to make a
>watch stop this would be
>great.
>
>I am aware of two types
>of time travel one in
>physical form and the
>other in energy form
>where a snapshot of your
>brain is taken using
>either the dimensional
>warp or an electronic
>device and then sends
>your consciousness back
>through time to part
>with your younger self.
>Please explain how safe
>and what your method
>involves.
>
>Also if you are one of
>the very, very, few
>beings with the ability
>to edit the universe
>PLEASE REPLY!!!
>
>Only if you have this
>technology and can help
>me exactly as mentioned
>please send me a
>(SEPARATE) email to:
>IneedTimeTravel@aol.com
>
>Please do not reply if
>your an evil alien!
>Thanks

A recent visit to a Goodwill toy bin resulted in these McDonald's toys: 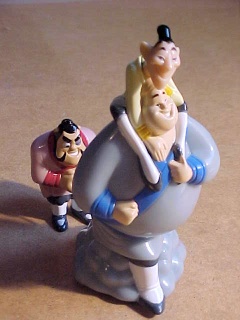 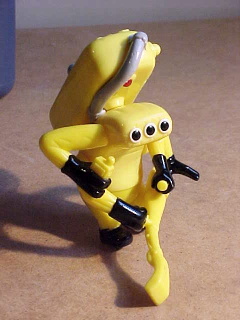 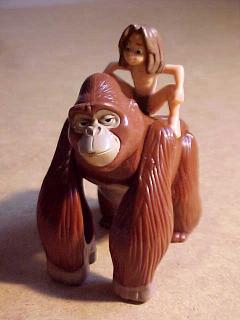 It kinda walks! But mostly, a monkey. 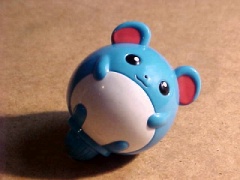 It spins. A bit.
Posted by Kyle No comments:
Email ThisBlogThis!Share to TwitterShare to FacebookShare to Pinterest

OK, I'm back. DSL came up quietly some time today. Hooray, I guess. No thanks to the policies and systems at Qwest ... happy thoughts, happy thoughts. God, what a relief, browsing-wise and upload-wise and any other wise that I can think of. Broadband is a good thing. I wish I were not such a spoiled brat that I can actually feel good about such a non-essential.
Posted by Kyle No comments:
Email ThisBlogThis!Share to TwitterShare to FacebookShare to Pinterest
Newer Posts Older Posts Home
Subscribe to: Posts (Atom)